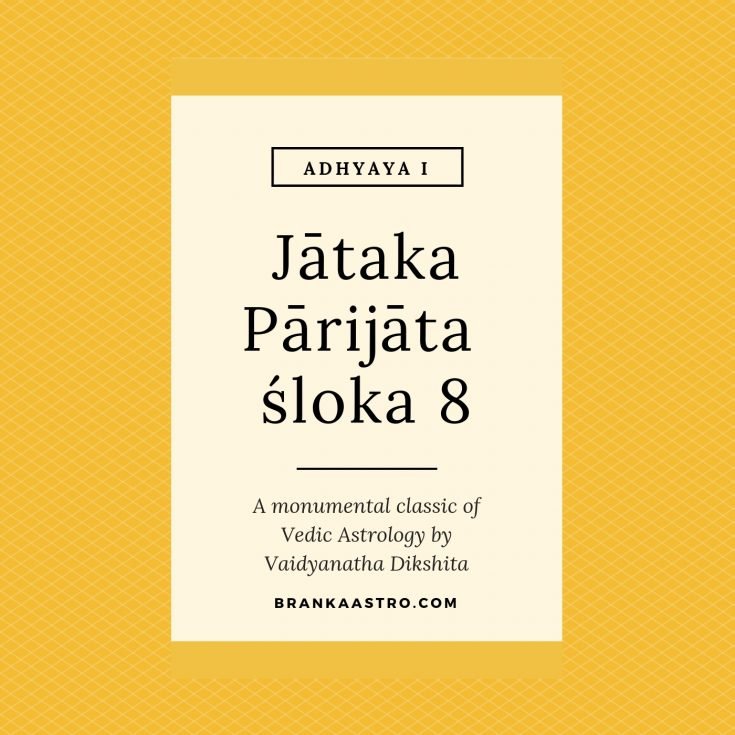 Translation: The parts of the body of the person Kala (kāla) beginning with Aries, are respectively the head, the mouth, the breast, the heart, the belly, the hip, the groins, the private part, the two thighs, the two knees, the two calves and the two feet.

Commentary: The term Kalapuruṣa here stands for Time-personified or Time itself presented as a human being; Kala indicating time and Puruṣa indicating the concept of the male energy. This concept is coming from the unity of creation wherein Puruṣa and Prakṛti are the two main forces, male and female energy of the nature, which are cause of the all creation just like mother and father are needed together to create a new life. This male energy is thereafter assigned to Sun (being a father, giver of the life, providing Agni or fire for ignition) who is also governing signs in horoscope and the Moon (being the mother, sustainers, providing necessary nurturing and feeding for sustenance) who is governing over nakṣatras. All created world is product of these yoga’s of the Sun and Moon on the sky which are formed at certain point in time decided by the movement of these luminaries. This yoga’s are being studied in Vedic astrology as Pañcāñga or the five limbs of time i.e. Vara, Tithi, Nakṣatra, Karana and Yoga.

In the śloka number 7, the author is mapping Signs and the nakṣatras in the Kalapuruṣa chart. Kalapuruṣa chart is a special chart in which all twelve signs are indicating different parts of the body of Lord Viṣṇu, Janardana, starting with Aries as a first sign, representing the head, whilst other signs are following in regular order indicating the other body parts assigned to other signs. This is therefore also a generic chart for all human beings wherein in any chart despite , Aries is still indicating head, Taurus mouth, etc.

Herein are described the limbs and their allotment to the twelve signs. This is also applicable to the twelve houses from the ascendant. It may be pertinent to ask why the author has not mentioned the arms anywhere, and therefore hereunder is given an image for easy memorization of the signs and limbs.

Gemini has been attributed to the chest and upper torso. This also includes the arms as can be seen in the illustration. Notably the sign Scorpio indicates the genitals, but specifically covers the entire hidden portion from the pelvis to the anus. Therefore the image is slightly misleading as Sagittarius covers the entire thigh portion until the knees begin.

Libra covers the visible portion from the lower abdomen to the pelvis. Due to this some allot the visible genital area to the sign Libra.

The distribution of body parts is different when dealing with Praśna or horary charts, thus further confirming the focus on natal horoscopy.

This knowledge is further essential in studying medical Jyotiṣa wherein disease related planets and planetary yoga’s afflicting certain sign and/or house are likely to impose their effects on that part of the body. For example, afflictions on sign Capricorn are likely to give health problems with knees, Aquarius ankles, Leo stomach, etc. On the other side, we can go a step ahead and note that these signs also have very specific indications when it comes to health, for example, Aquarius is known to be or the one which indicates heart diseases, being the 8th sign from the Cancer (8th placement indicates the disease) or the sign which represents heart. In the same way, all the other signs/houses are carrying potentiality to afflict or improve certain parts of the human body. Whilst in of houses it is important to take into account the D of the house to define the affected body part (Parashara, 1999).