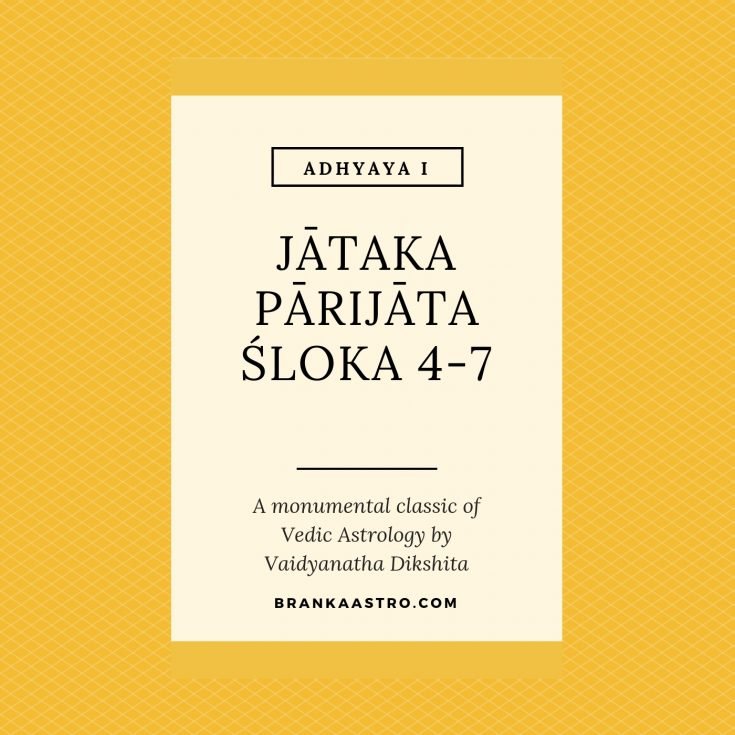 This article is an attempt to provide deeper understanding of Jyotish through the monumental classic Jataka Parijata, by the author Vaidyanatha Dikshita. The work consists of original Sanskrit slokas translated into English with a detailed commentary on the same.

Commentary: In this, at first glance simple and clear statement, there is very important information which is hidden in the choice of word given by the author. Wise Vaidyanatha is using two terms: saṁjña and viśeṣāḥ. Saṁjña is describing the given knowledge as complete and may even go as far as ṣaṣṭiyaṁśa level knowledge (ṣaṣṭiyaṁśa is a divisional chart which is also the main divisional chart to read about past life karma, whose one of the names is saṁjña) or knowledge which is recollected from the previous birth.

Whilst viśeṣāḥ has different meanings like special, peculiar, different, distinct and superior. With this author is announcing that the following ślokas will deal with the very special and superior knowledge on the given topic, i.e. signs.
Viśeṣāḥ is also well known special ascendant next to four other special ascendants and those are Hora, Bhava, Ghatika, Vighatika and Pranapada.

Translation: First sign is to astrologers known as Mesa, Aja, Vishwa, Kriya, Tumbura or Adya; second as Vrishabha, Uksha, Go, Tavuru or Gokula; the third as Dwandwa, Nriyugma, Jutuma or Yama and Yuga or Mithuna.

Commentary: In the above śloka author is giving different names for the same signs intending to reveal and teach different aspects in the nature of the same sign adding to the ground works of Jyotiṣa classic as Brihat Paraśara Hora Śastra, Saravali and the others who traditionally use one name for each zodiacal sign.

First three signs – meaning and implications of their given names

Here are some of the meanings and implications of the given names for the first three signs:

First sign: Meṣa (means ram, sheep or the first zodiacal sign); Aja (leader of the flock, he-goat, ram, sign Aries, vehicle of Agni, beam of the Sun); Viśva (omnipresent, applicable on Viṣṇu or Kṛṣṇa or all-pervading, whole, entire or universal, one of the tangs of Agni); Kriya (the sign Aries); Tumbura (?); Adya (being at the beginning, first, being at the head, unprecedented, excellent).

Third sign: Dvandva (pair, couple, male and female, by two, face to face, pair of opposites, stronghold, fortress, copulative compound, the sign of the zodiac Gemini); Nṛyugma (the sign of the zodiac Gemini); Jutuma (the sign Gemini); Yama (driver, charioteer, restraint, twin born, twin, forming a pair, twins of different sex, symbolic of the number two, one who presides over the pitris and rules the spirits of the dead, born from Sun and a pair, brace, couple); Yuga (pair, couple, brace); Mithuna (paired, forming a pair, pairing, copulating, sign Gemini or third sign).

Translation: The forth is declared as Kulira, Karkataka or Karkata; the fifth as Kanthirava, Simha, Mrigendra or Leya; the sixth as Pathona, Kanya, Ramani or Taruni; the seventh as Thauli, Vanik, Juka, Thula or Dhata.

Commentary: The author is continuing in the same manner naming next four signs with different names and with that reviling many important aspects of the same.

Fifth sign: Kanthairava (a lion, roaring from a throat, a roar, yell, cry, howl of animals or wild beasts, noise or sound); Simha (the powerful one, a lion, the zodiacal sign Leo, the king); Mṛgendra (king of beasts, lion, sign Leo, a king, domination over wild animals, lions mouth, lions seat, a throne); Leya (the sign of the zodiac Leo).

Eight sign: Ali (means scorpion, the Scorpion in the zodiac, one who possess the sting); Vṛścika (a scorpion, a zodiacal sign Scorpio, centipede, female scorpion); Kaurpi (the sign Scorpio); Kita (insect, Scorpio in a zodiac);

Tenth sign: Mṛga (deer or antelope in the Moon, a forest animal or wild beast, musk deer, either nakshatra Mṛgashira or the sign of zodiac Capricorn, also 10th arch or 30 degrees); Mṛgasya (having the face or head of deer, the sign Capricorn); Makara (a kind of sea monster alike crocodile, 10th sign of zodiac); Nakra (crocodile, alligator).

Sign Pisces – meaning, and implications of its given names

Commentary: The first half of śloka given above reviles the different names of the last zodiacal sign i.e. Pisces. These are: Mīna (meaning a fish or a sign of zodiac Pisces); Antya (last in order, time or place, immediately following, the twelfth sign of zodiac); Matsya (a fish, twelfth sign of zodiac); Prithuroma (having scales, a fish, zodiacal sign Pisces); Jhaṣa (large fish, a fish, the sign Pisces). These are indicating different aspects of the nature of the sign namely its symbol being fish, him being the last one of the twelve Raśis or that who is immediately following wherein the reference point is the ascendant itself (Antya), etc.

These synonyms, in general, are purposely used to revile the different aspects of the signs so that they can be used for numerous aspects of Vedic astrology to match the complexity of human life.

In the other half of śloka, author is for the first time giving a strong connection between Signs and nakṣatras as well as the fact that the signs are starting with the first sign Meṣa (kriyā) whilst other signs are following in circular order; and nakṣatras (which are referred to as stars) which are starting from Dasra (Aśvini). Learned Vaidyanatha is going a step further mapping the two, Rāśi cakra and nakṣatra cakra, in the 360°. Having in the mind that one whole sign is of 30° each and there are twelve signs spreading in the circular order over the zodiac of the 360°. Each nakshatra is of 13°20´ which are spread over the zodiac, forming the whole circle with 27 nakṣatras. It is presumed by the author that the scholar has mastered the base knowledge of astrology before approaching this work; hence he is not explaining the basis of Rāśi and nakṣatra chakra.

Lastly in the same śloka, author is reviling different names of zodiacal signs to be Ksetra (place, sphere, department, region, portion of space, zodiacal sign); Rikṣa (star of constellation, twelfth part of ecliptic), Rāśi (sign of the zodiac, one-twelfth part of zodiac, an astrological house, group, sum of the figure showing quantity), Bhavana (a place of abode, natal star, house, place, mansion)  and Bha (sign of the zodiac, star). These names are given for further explanation of the meaning of zodiacal sign itself, i.e. that there are twelve signs and one sign is one-twelfth part of that group, that they are covering a certain region or department of the time-space, etc.

This work was originally published in http://thejyotishdigest.com/